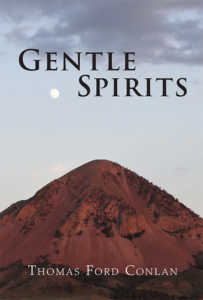 In the aftermath of a hurricane, Angelique, who lost her father to the sea and was carried to safety by her native Carib mother among the wild ponies of Cumberland Island in post-WWII Georgia, finds Samuel, who lost his mother in childbirth, barely alive on a Cumberland Island beach. The unlikely couple grows together through adolescence on the Barrier Islands off the Georgia coast. Societal pressures of the late 1960s and the turmoil of the Vietnam War force a separation, though a seed has been cast.

A story of generations, Gentle Spirits follows Samuel and Angelique through the splendor of nature as they experience the grace of dolphins and ponies on Cumberland Island; birds, dogs, butterflies, brook trout, and grapevines in Northern Michigan; trout-fishing in Spearfish Canyon; dogs and sheep on a Montana ranch; breathtaking duck migrations in the Canadian Provinces; and hawks and a mountain bluebird on Bear Butte while they navigate the challenges of a young adult world in search of meaning, in life and in death.

“Thomas Conlan’s Gentle Spirits pulls the reader into the story from the first page. The characters and settings come alive with description and pacing that’s just right as the story banks and turns. “Just one more chapter” quickly turns into a binge-read. Conlan’s deft storytelling touch is hard to resist as we follow Samuel and Angelique and the rest of the cast and pull hard for them all to find their way.”
—Michael K. Brantley, author of Galvanized and Memory Cards 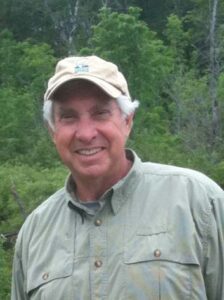 Tom Conlan lives, writes, and tends his modest grape vines on a small farm in the highlands of Northern Michigan. He has captained a Coast Guard Cutter, sailed the world's lakes and oceans, and now searches for the elusive brook trout in backwater streams.
Tom's prose and poetry have appeared in numerous literary journals, as well as Michigan Trout Magazine. His lyrical memoir My Journey Begins Where the Road Ends... was released in June 2017.
He is currently working on a visual, poetry collection entitled, Secret Conversations.

Tom attended the Iowa Writer's Workshop, holds a Master of Fine Arts in Creative Writing from Queens University of Charlotte and a Master of Science from the US Naval Postgraduate School in Monterrey, California. Learn more about Tom on his website at www.thomasfordconlan.com.