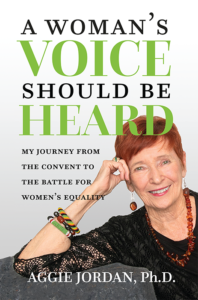 This is Aggie's story of growing up in a staunch Irish Catholic family, attending 12 years of Catholic school, joining the convent at 17 years of age, as a teacher-nun for 14 years, and eventually an entrepreneur preparing her to fight the battles for women’s equality. Your journey may be different. Whatever it has been, it influences who you are today and what you can accomplish when your voice is heard. Aggie Jordan’s journey from nun to feminist tells her stories of what influenced her to become a nun and her metamorphosis into a businesswoman who fought for women’s equality. Her history can teach us how we might progress and win the battles that continue today. Women who work inside or outside the home, women entrepreneurs, and women raising children seek inspiration, hope, and encouragement. She hopes this book will enrich their spirits to continue the fight for equality. The book shouts out to women how important their women friends are, how women mentors can be the springboard to success, and most of all, using their voices to be heard in facing their futures. Here’s hoping these stories encourage you to become visible in your journey by making sure your voice is heard. 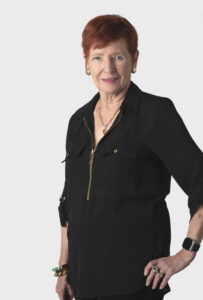 Aggie Jordan is the former founder and CEO of Jordan-DeLaurenti, Inc, a training and contract management company. Since selling this business, writing has been her life’s work. A former small business columnist for the Dallas Times Herald, and Prime Women, an online magazine, and a writer for The View, the monthly magazine for the Sun City Shadow Hills Community in Indio, California. Aggie has produced over 60 articles for these publications. She is the author of The Marriage Plan: How to Marry your Soul Mate in One year or Less, and The Book of Robert, a biography of Robert DeLaurenti, a first-generation Italian immigrant. Aggie has enjoyed traveling with her husband to over 75 countries and is aiming for the 100 mark.

She has been a guest on many television shows, including the CBS Morning Show and ABC Good Morning Dallas, as well as a number of radio broadcasts. A native of West Pittston, Pennsylvania, a former nun, a teacher, and a relationship counselor, Aggie hopes to inspire women to have their voices heard whenever, wherever, and by whoever challenges their rights to human equality.

Purchase the paperback on Amazon here.

Purchase the paperback on Bookshop here.

Purchase the hardcover on Amazon here.

Purchase the hardcover on Bookshop here.

Purchase on Barnes and Noble here.

Praise for A Woman's Voice Should Be Heard: